Remember that time I wrote about my previous blogging life? Well, I decided it was time to pull another oldie but goodish (yes, goodish) from the archives. Yet another installment chronicling my move from Chicago and Florida. (unedited from original version) Reminder: I was driving a 24′ Budget rental truck, moving just me and Mister, the cat. The Statesville mentioned is in North Carolina. 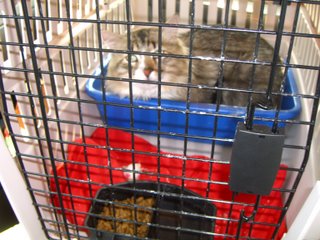 I apologize for the title. I couldn’t come up with any a song that actually refers to Florida. However, I’m quite certain that I will come up with five tomorrow.

Got a bit of a late start this morning, leaving Statesville around 11am. In less than two hours, I had to pull over because Mister was having a massive panic attack. Cat food and water all over the boom box (gotta have CDs on the road), the bag of CDs, the tissue box, the cab of the truck and, of course, me. This was followed with a scattering of litter from the litter box. There is litter stuck on the passenger side door, the passenger dashboard, all over the cab and passenger seat… and even in my hair. This time around, he decided he wasn’t going to give up. He began howling and scratching the front door of his carrier (wire grid). However, to get to the front door, he had to walk through water, litter and food. So his paws (and tail) became covered with damp food-smelling litter. He wouldn’t quit, and almost succeeded in tipping over the carrier with his pawing. After over a half hour, we had to pull off the road. In the Wendy’s parking lot I pulled him out of the carrier (still in the cab of the truck) in a towel, in an attempt not to cover myself in damp litter. Sat with him a while, he calmed down a bit. Let him walk around the cab of the truck while I took apart his carrier and cleaned it out (there goes that towel). Replaced the pillowcase (he’s supposed to lay on that, but doesn’t) and the litter box (which is where he actually curls up). Put Mister back into the carrier, where he was a perfect angel the rest of the day.

However, this particular Wendy’s was… just sad. It smelled awful, two of the three women’s toilets were “broken”, and everyone working (and most of the customers) had abominable attitudes. One customer (a round white woman) started complaining about the sizes of Frosties that she had received, saying her son had certainly not ordered two large Frosties. He ordered one large and two smalls. The cashier insisted that the boy had ordered two large Frosties. The customer screamed across the restaurant for her son to come over and tell the cashier (and, now, manager) what he had ordered. However, the son was embarassed, and shy and beginning to doubt himself. He couldn’t look at anyone and he really couldn’t remember what he had said in the first place. Well, that didn’t make his mom any less upset (let alone apologetic). No, she continued to scream that she now wanted two small Frosties (in addition to the junior size Frosty someone had already consumed). Strangely, the manager didn’t want to make the change (a change of what – like 60 cents? And sidenote – who complains for getting more than they ordered?). So this goes on and on, the woman screaming that it wasn’t what she asked for (duh, she didn’t even order it), and the cashier saying she could make a new transaction, or swap out the drinks, but couldn’t give her the refund (that wasn’t even a dollar!). Finally, another woman, who had been waiting to order while this debacle ensued, offered to buy one of the large Frosties in an effort to end the drama. The angry customer acted as though she’d been touched by God and the manager was simply a handmaiden of the devil. Ridiculous.

Fun description – the helpful customer was totally Geena Davis-esque. Pale skin, red lips, tall, slim but with wide, regal shoulders. She was wearing red shorts, a light blue and white gingham 3/4 length button down shirt, sandals and a straw hat with a wide, floppy brim which she tucked her dark hair under.

The rest of the trip was fairly uneventful. We’re in Jacksonville, Florida. I’m spending the evening in a Red Roof, where Mister is completely legal. It’s the strangest thing ever – this place is nicer than most of the hotels I’ve been in… in the past few years (resorts excluded). It’s been recently redecorated (yesterday, maybe?) and is garish in its attempt at modern coolness. But I’m obsessed. I love it. Ordered delivery from Wok-N-Roll. Mistake. Chicken with cashews – awful. I ended up eating each ingredient separately, and they all tasted exactly the same. Carrots, celery, chicken, cashews, water chesnuts, baby corn… hey – those are all C words. I wonder if they planned that. The rice was yellow and pathetic. Crab rangoon was horrible. The outside was not crispy, more chewy. Kind of like the consistency of beef jerky, where you almost can’t even tear a piece off. There was also an egg roll that came with. Blech. Apparently this place is a chain. Don’t do it. Just don’t do it.

And now I will retire to bed. In theory, tomorrow should only be about 4 hours of driving – then there will be unloading of the truck into storage, which will be fairly miserable. (sigh) BUT I’ll be there!!! I’ll be in St. Petersburg!!!

Let me know your thoughts on this Cancel reply